A Day of Library Conversation on Open Public Data 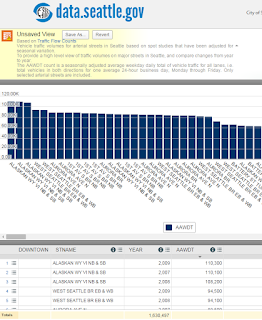 [Note: this article appears concurrently in the ACRL-WA/OR newsletter for Fall 2015, n76]

On October 13, Seattle Public Library hosted a day of library conversation on open public data. Attendees came from around the Puget Sound area and included libraries such as Seattle Public Library, Pierce County Libraries, King County Libraries, Sno-Isle Libraries, the University of Washington and the UW Libraries, the City of Seattle, and OCLC. Representatives from Socrata, a company that provides solutions for governments to put their data online, were also in attendance. The idea behind the workshop was to facilitate a discussion regarding the role of the library in open and government data initiatives. The hope was to brainstorm ways in which public libraries can partner with local data initiatives, how to provide library staff with the skills and resources they need to participate in local data, and how to support the library's community of users.

The session included folks from Socrata presenting examples of some of the government data they provide solutions for, as well as a brainstorming session on what a library's potential role is regarding open data. In the Puget Sound there is already a bounty of online government data available (for example, http://data.kingcounty.gov/, https://data.seattle.gov/, https://data.wa.gov/, http://www.census.gov/data.html, and many, many more), and libary user communities are accessing that data from library computers. The question is: could or should libraries be doing more to support what users are doing?

Though no magic-bullet solutions were found, everyone involved agreed it was a good initial conversation -- it was the first time all of us had collected together to learn about how we are or would like to be supporting open data, what our staff needs to be able to continue or begin supporting open data initiatives, and what the future might look like as far as library support for these endeavors goes.

I'm sure this was the first of many meetings on the topic, and everyone looked forward to potential collaboration on future projects, and/or to more discussion on particular concepts.

Following the afternoon workshop, an evening event at SPL was held. Titled "From Data to Action: Open Data and You," the event included a panel presentation and audience discussion. Panelists were:
Facilitated by Jim Loter, Director of Information Technology at SPL, discussion topics included resources for open data (with a focus on data.seattle.gov), best ways to learn about data if you're starting out on a project, where to acquire data-related skills, and examples of the creative ways people have used open data. The best part of the night was the Q&A, with questions ranging from Seattle policy decisions, skill training, ideas for how to use open data, and more.

The presentation was recorded, and will be available online via SPL soon.
at November 30, 2015